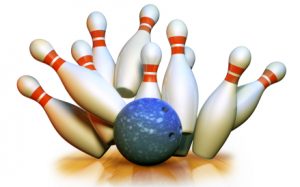 Imagine that you are competing for the national championship in bowling.  You are the reigning champion.  Your skills and style have never been seen before and you’ve drawn massive crowds at every event leading up to this final match.  Now it all comes down to this moment.  A match-up between you and your opponent, a man who has made fortunes through sponsorships, yet has never won the national championship.  The much anticipated event is finally here.

With the passing of each frame, you quickly reach an insurmountable lead.  Records show that no opponent has ever come back from such a deficit.

Suddenly, the other bowler stops the match.  He picks up his bowling balls and leaves with a few friends.  No-one…not you, the media, bowling officials…nobody but a few friends were allowed to follow.  The crowd looks at each other in disbelief.  They wait a few hours, but finally grab their coats and go home.  You, by the way, were not allowed to continue bowling, but rather allotted a couple pins per remaining frame to complete the scoring process.

The next morning, the opponent is found celebrating his championship victory…with the media!  When asked how this could be, he presents a hand-written score sheet full of strikes to prove he had beaten you.  In the middle of the night, he had found a private, secluded bowling alley and claimed to have finished his game with nothing but strikes.  He submits a scorecard written on a napkin as proof of his historic comeback. Nobody witnessed the strikes.  Nobody saw him bowl.  Yet, his close friends and unsanctioned napkin were his proof.

The media declares him the national bowling champion.  You protest the obvious corruption and illegitimacy of the game, but YOU are found to be disrespectful.  YOU are found to bring dishonor to the institution of bowling…and sportsmanship in general.

THIS is our world.

On a Ridge in the Ozarks
Contact@VoiceHangar.com
1-870-56-VOICE (86423)
Manage Cookie Consent
We use cookies to optimize our website and our service.
Manage options Manage services Manage vendors Read more about these purposes
View preferences
{title} {title} {title}