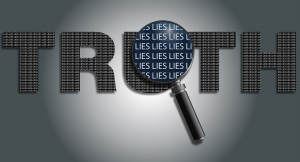 We live in a world of narratives.  A narrative is neither good nor bad in and of itself.  By definition, a narrative is the “recital of a story, or a continued account of the particulars of an event or transaction; story” as defined by Webster’s 1828 Dictionary.  It is the message contained within the narrative that determines the quality and characteristics of the narrative.

A “recital of a story or a continued account of an event” does not automatically qualify the narrative as truth.  Also, the frequency of the recital does not determine its truth.  A lie spoken a million times does not become truth because of its frequency of repetition.  What does determine truth?  Truth.  Truth determines truth.  Because of that, it requires investigation to discern the veracity of the narrative.  This is nothing new.  In fact, according to Scripture, this investigation is an act of nobility.

Luke is the author of the book that bears his name in the Bible.  Luke is not opposed to the use of a “narrative.”  In fact, Luke acknowledges the use of prior narratives (or declarations) as he introduces his gospel account.  Luke 1:1-3 begins with this, “Inasmuch as many have undertaken to compile a narrative of the things that have been accomplished among us,…” (ESV).

If you look into the text a bit deeper, you’ll see the indication of a prior investigation or fact-checking system.  The word “accomplished” is a simpler way of saying that the things that were done were most assuredly believed based on full proof and evidence.  The word is plērophoreō.  The narratives that were recited were proven to be true with plenty of evidence and the assurance of accuracy.  That’s just the first verse!

In verse three, Luke makes it clear that he didn’t turn a blind eye to his obligation to check the validity of the narrative, but he “followed all things closely for some time past.”  Even the message being delivered by “eyewitnesses and ministers of the word” was cross-checked for accuracy and truth.  The identity of the narrator or their occupation does not automatically determine truthfulness.  Narratives must be investigated before believed.

In the book of Acts, also written by Luke, we read the God-inspired details of the God-inspired actions of the early days of the Bride of Christ, the church.  If we fast-forward to chapter 17, we read the account of Paul’s second missionary journey as he traveled to Thessalonica, Berea and Athens…in that order.  This is an amazing chapter and so rich with examples of irresponsible agitators, responsible educators and idol worshipers.  I want to focus on the responsible educators.

The Bible has very little to say about the town of Berea or the citizens thereof.  In fact, the town is only mentioned three times in the Bible and two of the times are in this chapter.  The other mention is when describing Sopater’s home town (Acts 20:4).  It does, however, give us another example of what pleases God.  God (through Luke) describes the Jews in Berea as “more noble than those in Thessalonica.”  While many attributes of the Bereans may have been more noble, the attribute mentioned in Scripture is their eagerness to receive the Word and their determination to examine the Scriptures (the Old Testament) daily to see if what Paul and Silas said was true.  They didn’t believe the narrative blindly.  They diligently researched the truth to establish either the veracity or falsity of the narrative.

It is often said that the best way to identify a counterfeit is to study the authentic.  We don’t need to study all counterfeits, but rather one authentic truth.  A proper understanding of what is true will bring to light what is counterfeit.  While it is easy to trust the narrative when delivered by someone we love or respect, it is still our responsibility to investigate its truthfulness.  That even applies to this article.

Remember, we are living in a world where its king is eager to deceive, divide and destroy.  These three satanic attributes alone are listed in the Proverbs list of seven abominations to God (Proverbs 6:16-19).  Satan is the deceiver of individuals and nations (Genesis 3, Revelation 20:3).  Satan has oftentimes used a narrative to accomplish his goal of separating people from God and leading them to destruction.  Look at the narrative of the pro-choice movement, for example.  The narrative is that women are victims in a man-dominated world and they deserve the “right” to live as they please and do whatever they want to their body.  The goal, however, is murder.  Proverbs 6:17 lists a lying tongue and the shedding of innocent blood as side by side abominations.

To be clear, a narrative is not an agenda.  A narrative is a tool by which to accomplish an agenda.  If the minds of men believe a narrative, it accomplishes a goal…good or bad.  Satan has ALWAYS used a false narrative to achieve his goal.  Looking back at Acts 17, you see what happens to people who blindly followed a false narrative.  The religious, yet unbelieving Jews in Thessalonica rejected the truth, turned to the secular world for help and then formed a mob to attack those who dared to reject THEIR narrative.  This lawless mob even traveled to other cities to agitate the crowd and attempt to assault the rejectors of their narrative.  I can’t help but notice the similarities we see unfolding today.

If we believers are told to test the spirits (1 John 4:1) and examine the Scriptures daily (Acts 17:11) to verify the narratives of the “Christian” world, I contend that it is wildly unwise to remove all caution when listening to the narratives of a lost world.  We often drop our guard when hearing messages inside the church.  I get that.  We trust the teachers.  But…the world?  The ruler of this world, the prince of the power of the air, is making every effort to deceive the world and yes, even the church, to accomplish his goal.  Scripture declares that he prowls around as an angel of light (2 Corinthians 11:14), coaxing us to believe that he and his narratives are trustworthy and true.  One day, that ancient serpent will be cast into the lake of fire.  Until then, be responsible.  Be vigilant.  Be noble.

On a Ridge in the Ozarks
Contact@VoiceHangar.com
1-870-56-VOICE (86423)
Manage Cookie Consent
We use cookies to optimize our website and our service.
Manage options Manage services Manage vendors Read more about these purposes
View preferences
{title} {title} {title}